Ten subjects with confirmed ADA-deficient SCID and no available matched sibling or family donor were enrolled between 2009 and 2012 and received transplantation with autologous hematopoietic CD34+ cells that were modified with the human ADA cDNA (MND-ADA) γ-retroviral vector after conditioning with busulfan (90 mg/m2) and ERT cessation. Subjects were followed from 33 to 84 months at the time of data analysis. Safety of the procedure was assessed by recording the number of adverse events. Efficacy was assessed by measuring engraftment of gene-modified hematopoietic stem/progenitor cells, ADA gene expression, and immune reconstitution.

With the exception of the oldest subject (15 years old at enrollment), all subjects remained off ERT with normalized peripheral blood mononuclear cell (PBMC) ADA activity, improved lymphocyte numbers, and normal proliferative responses to mitogens. Three of nine subjects were able to discontinue intravenous immunoglobulin replacement therapy. The MND-ADA vector was persistently detected in PBMCs (vector copy number [VCN] = 0.1–2.6) and granulocytes (VCN = 0.01–0.3) through the most recent visits at the time of this writing. No patient has developed a leukoproliferative disorder or other vector-related clinical complication since transplant.

Diagram of participant flow and number of subjects entered, followed, and analyzed. 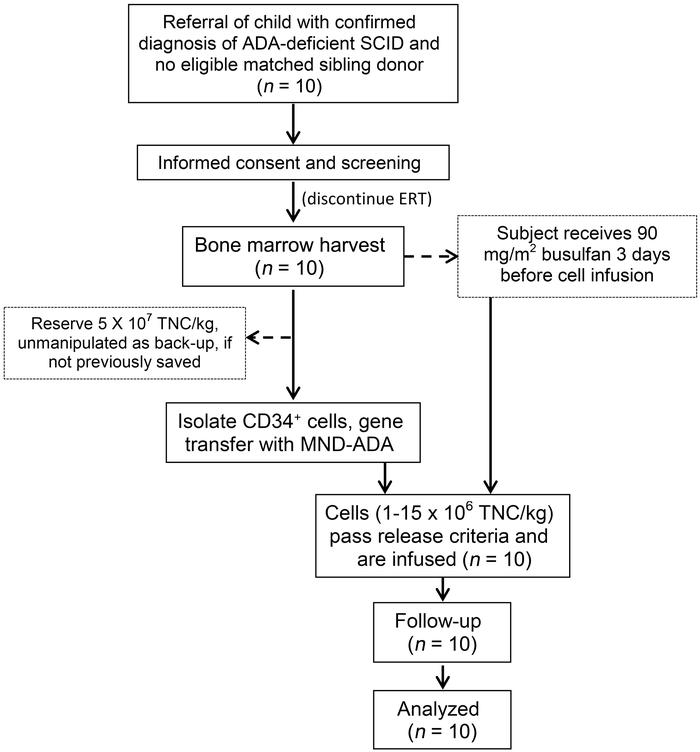