Candida parapsilosis is a major cause of human disease, yet little is known about the pathogen’s virulence. We have developed an efficient gene deletion system for C. parapsilosis based on the repeated use of the dominant nourseothricin resistance marker (caSAT1) and its subsequent deletion by FLP-mediated, site-specific recombination. Using this technique, we deleted the lipase locus in the C. parapsilosis genome consisting of adjacent genes CpLIP1 and CpLIP2. Additionally we reconstructed the CpLIP2 gene, which restored lipase activity. Lipolytic activity was absent in the null mutants, whereas the WT, heterozygous, and reconstructed mutants showed similar lipase production. Biofilm formation was inhibited with lipase-negative mutants and their growth was significantly reduced in lipid-rich media. The knockout mutants were more efficiently ingested and killed by J774.16 and RAW 264.7 macrophage-like cells. Additionally, the lipase-negative mutants were significantly less virulent in infection models that involve inoculation of reconstituted human oral epithelium or murine intraperitoneal challenge. These studies represent what we believe to be the first targeted disruption of a gene in C. parapsilosis and show that C. parapsilosis–secreted lipase is involved in disease pathogenesis. This efficient system for targeted gene deletion holds great promise for rapidly enhancing our knowledge of the biology and virulence of this increasingly common invasive fungal pathogen. 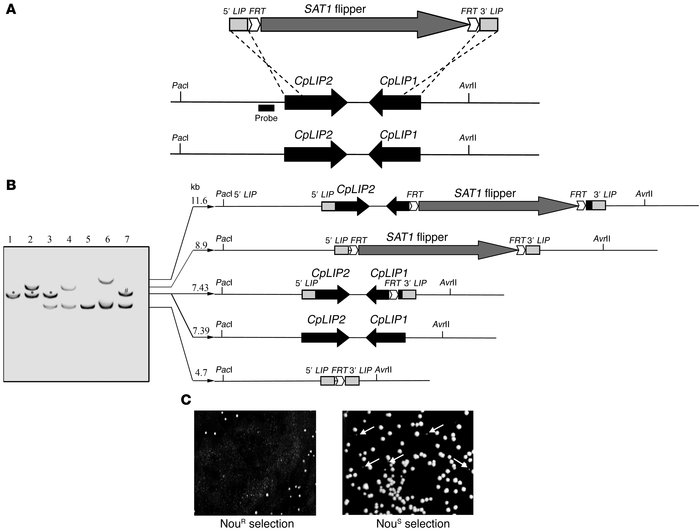