The generation of Ig-secreting cells (ISCs) from memory B cells requires interactions between antigen-specific (Ag-specific) B cells, T cells, and dendritic cells. This process must be strictly regulated to ensure sufficient humoral immunity while avoiding production of pathogenic autoantibodies. BAFF, a member of the TNF family, is a key regulator of B cell homeostasis. BAFF exerts its effect by binding to three receptors — transmembrane activator of and CAML interactor (TACI), B cell maturation antigen (BCMA), and BAFF receptor (BAFF-R). To elucidate the contribution of BAFF to the differentiation of B cells into ISCs, we tracked the fate of human memory B cells stimulated with BAFF or CD40L. BAFF and CD40L significantly increased the overall number of surviving B cells. This was achieved via distinct mechanisms. CD40L induced proliferation of nondifferentiated blasts, while BAFF prevented apoptosis of ISCs without enhancing proliferation. The altered responsiveness of activated memory B cells to CD40L and BAFF correlated with changes in surface phenotype such that expression of CD40 and BAFF-R were reduced on ISCs while BCMA was induced. These results suggest BAFF may enhance humoral immunity in vivo by promoting survival of ISCs via a BCMA-dependent mechanism. These findings have wide-ranging implications for the treatment of human immunodeficiencies as well as autoimmune diseases. 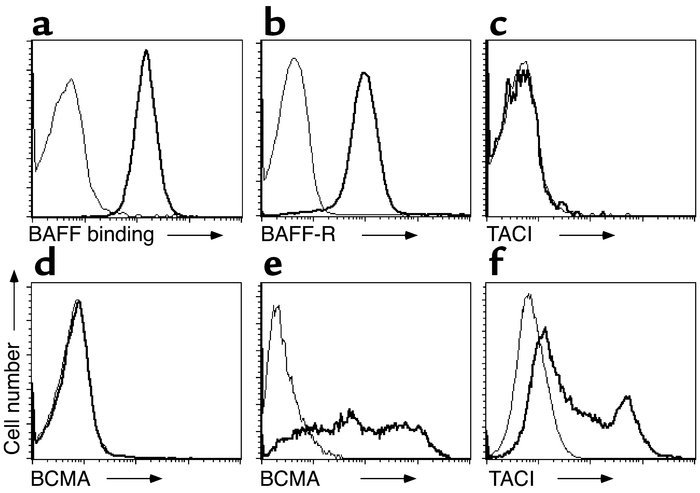 Expression of BAFF-Rs on human B cells. Human splenic B cells were incubated with () soluble BAFF or mAb specific for () BAFF-R, () TACI, or () BCMA. These results represent experiments performed using B cells from three to five different donor spleens. ( and ) 293T cells were transiently transfected with cDNA encoding human () BCMA or () TACI. Expression of the transfected protein was assessed using the anti-BCMA and anti-TACI mAb’s described in and . For each plot, the thick and thin lines represent the fluorescence of cells incubated with the specific or control reagent, respectively.